Hey everyone!
So I had started my window cleaning business back in May of this year and so far everything is going however the issue I am now running into is squeegee handle failures. I originally bought the Ninja squeegee kit, of course I ditched the channel and replaced it with the Ettore Super Channel. Modded it with grip tape and on the back side of the channel, even placed a thin cut of old squeegee rubber where the handle clamp sits so it wouldn’t slide around, and has worked really well.

However back in July, my first handle broke (attached photo) and the circled points are where its constantly doing it with every replacement. (received a replacement handle from Unger and while I was waiting, overnighted a new handle from WCR). Now months later, this past week, both the replacement Unger sent and my WCR purchased handle have failed in the same spots. I tried removing the metal spring and worked for a few jobs before the week was over but ended up popping out like before.

Anyone else experience this issue with the Unger NInja Handles? I’m hoping there is something to resolve this as I really like the Ninja handle however not wanting to buy a third handle for it to do the same thing, I purchased an Ettore Pro+ handle for the mean time. 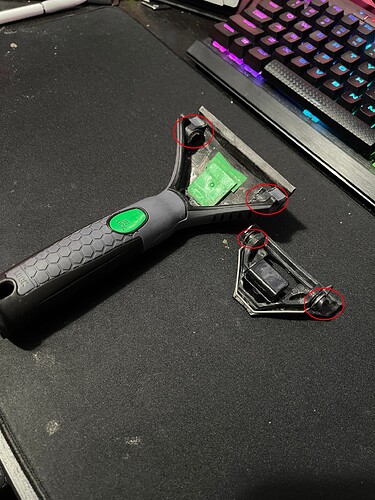